Like many tumescent liposuction procedures performed today, most fat transfer procedures are done in the doctor’s office as an outpatient. The physicians’ office does need some special prepping and equipment though before procedures can be performed. Typically, the patient goes home after the procedure. In fact, most Innovations Medical patients walk themselves out. Remember, tumescent liposuction and awake fat transfer are designed to have minimal downtime and most patients can return to work within 1-3 days.

How Safe Are Breast Augmentations?

In order to address safety, Innovations Medical must address the safety of both tumescent liposuction procedures, and fat transfer. Tumescent liposuction is an extremely safe technique, and to date, several studies have shown NO severe complications. This means there have been NO:

Similarly, fat transfer has been shown to be extremely safe. Only rare complications of infection or irregularity have been reported. In addition to this, since the fat and PRP are your own tissue, reactions are impossible. You could never use fat from your friends no matter how much you wish you could. The only possibility would be from an identical twin. There were some concerns in the 1980s and early 1990s that breast fat transfer could interfere with mammogram detection of breast cancer. These concerns are NO longer a concern with modern mammogram techniques. The safety of natural breast fat augmentation makes it a rapidly growing procedure in the United States and other countries.

At Innovations Medical, we hear this question a lot. With the use of modern fat transfer techniques, about a 50-70% fat cell survival can be reached. When PRP is added to the harvested fat, it is estimated that about 70-85% of the transferred fat will survive. The newest advancement to breast fat transfer is the use of SVF Stem Cells to help increase the viability of the fat cells in the transfer area. When the additional step of harvesting SVF is added, fat cell survival is estimated at 90-95%. Based on data collected from following fat transfer patients over 10 years, it is believed that fat cells that survive beyond 3 months after the procedure survive permanently. 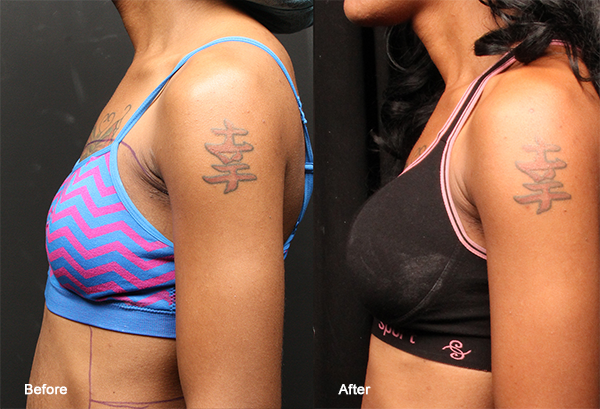 The fat has no shape of its own and is limited by the shape of the skin covering the breast. Implants have a shape of their own and can give a better aesthetic look in some patients.

Implants can stretch the skin and give a better size and shape for some women with small breasts or poorly shaped breasts.

Implants can give a better result when combined with breast reduction for women with large or extremely droopy breasts.