What is a BBL?

Fat transfer to the buttocks or the Brazilian Butt Lift (BBL) is the fastest growing cosmetic procedure in the United States. At our practices in Dallas and Fort Worth, we have performed hundreds of BBL procedures and have hundreds of happy patients. Candidates for BBL include individuals who have lost weight, would like to add contour to their bodies, or would simply like to have a fuller buttock area. The Brazilian Butt Lift is performed as an in-office procedure and can result in a fuller, rounder behind.

How does the BBL procedure work?

During the butt augmentation procedure, both the area from which the fat is harvested and the treatment site are anesthetized with a tumescent (local) anesthetic. The fat is then removed from the areas, usually using Vibration Assisted Liposuction or “Tickle Lipo”. “It’s all about moving the fat from where you don’t want it to be, and placing it somewhere that you do. New techniques allow us to have up to a 50-85% survival rate for the harvested fat cells, and that means a much better result that will last.” -Dr. Bill Johnson

The Brazilian Butt Lift is one of several procedures more broadly known as fat transfer. In fat transfer procedures, fat is removed from the body and later re-injected into a more desirable location in the body. These procedures allow us to do Natural Body enhancement without using foreign substances.

Fat transfer procedures are performed in our procedure room. Dr. Johnson uses tumescent anesthesia to numb both the area from which the fat is harvested and the treatment site. Using tumescent liposuction, fat is harvested from a donor site where your fat is easily removed without damaging the fat, such as your stomach, love handles, arms, or thighs. 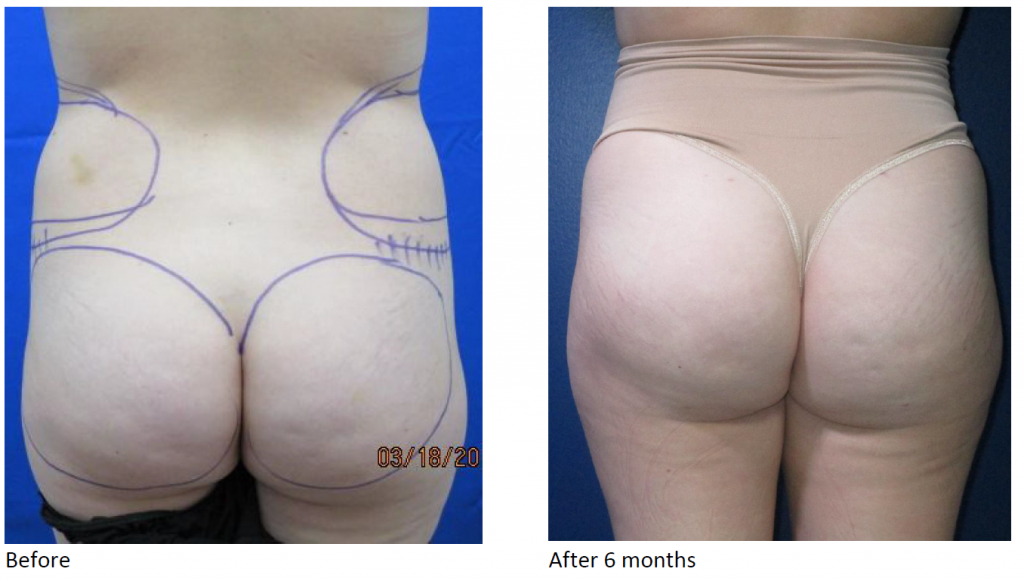 Once harvested, your fat will go through a separation process to remove excess fluids. Dr. Johnson then injects the harvested fat using special techniques. This process may be repeated until the desired correction has been achieved. Harvesting the fat cells is usually performed in conjunction with SmartLipo. Adding SmartLipo tightens the skin by as much as 30% for a better cosmetic result.

At our practice in Dallas, the Brazilian Butt Lift is only one of our many advanced cosmetic procedures aimed to help improve your figure using your body’s own resources. By using the patient’s own tissue for augmentation, a more natural approach is achieved. There is no chance for an adverse or allergic procedure as compared to using artificial substances such as implant and no capsule hardening or other late complications.

Who is an ideal candidate for a BBL?

Most women or men who want buttock enhancement are candidates for BBL (Buttock Fat Transfer). You need to be in good enough general health to safely have the procedure. You should also not be on any anticoagulant medication (blood thinners)for a few days around the procedure. It is important to liposuction enough fat to get a good enhancement. Typically, at least 300 milliliters of fat (just over 1/2 pound) is needed on each side to make a significant difference. Most patients benefit from at least 500-700 milliliters on each side. Enhancement larger than 1000 milliliters on each side can be done on occasion. Certain buttock shapes such as “V” shaped or “Square” shaped may benefit from some liposuction on the buttocks as well. We refer to this as a 3D BBL. Patients with a limited amount of fat may also benefit from a 3D BBL.

How much is a BBL?

A BBL (fat transfer to the buttocks) typically costs $2,500-4000 for the fat transfer itself. However, the cost of the liposuction to obtain the fat used to transfer must also be added to the total cost. This can add $2,500 to several thousand dollars to the total. Often the price of the liposuction is bundled with the BBL to give a discount for the package. For example, a common package we do is upper and lower stomach with love handles and BBL for $7,500-8,500. Further discounts or promotions are sometimes available. The Brazillian Butt Lift or Fat Transfer Procedure to the Buttocks are performed at our Dallas and Fort Worth locations.

So You’ve Had a Brazilian Butt Lift; Now What?

Q: Where does the fat come from? ❯

A: We generally take the fat from the abdomen, love handles, arms and/or thighs.
Q: How long does it last? ❯

A: The butt augmentation lasts years because it is your own fat.
Q: How much fat is needed for the procedure? ❯

A: The amount of fat will vary depending on the area being treated and the desired size.
Q: What is the downtime? ❯

A: Downtime is similar to SmartLipo. Many patients can return to work the next morning. There is some soreness in the area and you will not want to work out for about 2 weeks. Read our recovery blog for more information So You’ve Had a Brazilian Butt Lift; Now What?

Brazilian Butt Lift Before and After Photos*