1. Question: Will stem cells from my fat help my Peyronie’s Disease? ❯

Answer: Yes for most patients. Most studies show straightening.

3. Question: How many treatments will I need? ❯

Answer: Typically one treatment is done. Some patients may desire a second treatment for further improvement or recurrence.

4. Question: Should I do AWT (ESWT) with the stem cells? ❯

Answer: AWT appears to have an additive effect, so we recommend it. AWT is also easy to repeat for further results.

What is Peyronie’s Disease?

Peyronie’s Disease is a localized fibrotic disease of the penis that results in a deformed penis, pain, and often erectile dysfunction. Surveys show Peyronie’s Disease to be present in about 5% of men. The prevalence increases with age. The actual number of affected may be underestimated because some older men never seek treatment. This page is written to help readers gain an understanding of the use of adult stem cells for Peyronie’s Disease. We also want to help you evaluate if stem cell treatment should be an option for you or your loved one. The page covers the following:

The underlying cause of Peyronie’s Disease is unknown. It is believed that multiple factors have a role in the development of the fibrous area known as plaque. Factors that are believed to have a role are a genetic predisposition, local trauma, and blood flow changes to the area. Some studies have found a weak association between Peyronie’s Disease and:

Early studies suggested that many plaques resolved in about a year without treatment. However, later studies have shown this to occur only about 12% of the time. The curvature worsens in the first year in 40-48% of men. 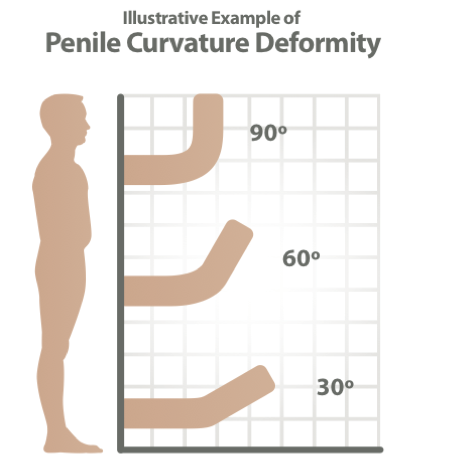 The early phase of the disease is believed to be inflammatory and is often associated with penile pain. The inflammatory phase usually resolves in around 18 months. Over 90% of men also see resolution of pain by about 18 months. Unfortunately, up to 50% of men are unable to have adequate sexual function even after the pain resolves. For more on the cause of Peyronie’s Disease see: https://www.niddk.nih.gov/health-information/urologic-diseases/penile-curvature-peyronies-disease.

The current strategy for treating Peyronie’s Disease is rapidly evolving. Most experts believe that early intervention using medications is likely to be more effective than waiting until the disease has stabilized. Commonly used treatment options are:

1. Pentoxifylline (brand name: TRENtal). This is an oral drug that blocks the effect of a destructive growth factor that is present in the forming plaque in Peyronie’s Disease. Pentoxifylline effects may not be present for 4-6 months, so continuation of the drug is important even if no effects are seen. Pentoxifylline is effective when used early on, but less so with a well-established or calcified plaque.

2. Other oral drugs include:

None of these drugs have been shown to be effective in good clinical trials. Most are rarely used today.

3. Injections into the plaque (intralesional therapy) are safe, well-tolerated, and have been shown to work in several studies. Medications used include:

4. Topical treatments. Many creams and lotions have been tried, but none have been shown to be consistently effective.

5. Penile traction. This technique stretches the flaccid penis and is usually used with medications. Early studies show traction to be effective in many patients.

6. Surgery. Several different techniques can be used. One small study showed a patient satisfaction rate of 86%.

If you are a man who is doing well with one or more of these options, this might not be the right time to consider adult stem cell treatment. See our blog Understanding Adipose-Derived Stem Cells. If you have not responded or you do not like the options available to you, adult stem cell therapy is an option you may wish to consider.

How Are Adult Stem Cells Deployed for Peyronie’s Disease?

We refer to using the adult stem cells/SVF as deployment. The typical deployment for Peyronie’s Disease is into the shaft of the penis using a small needle. We do some special treatments to the penis using a device called Acoustic Wave Therapy (AWT) also known as Extracorporeal Shock Wave Therapy (ESWT). We begin with an AWT treatment. After 2-3 days we do another AWT treatment and harvest and deploy the SVF. The SVF is deployed into the shaft of the penis using a needle. First, we numb the penis, and then we deploy the SVF into the area of the Peyronie’s plaque. Some work is done to disrupt the plaque during the injections of SVF. Finally, after 2-3 more days a third AWT treatment is performed. To read more on stem cells see our blogs What are Stem Cells and Understanding Adipose-Derived Stem Cells.

Extracorporeal Shock Wave Therapy (ESWT) devices are used widely for the treatment of kidney stones. These devices focus shock waves to the area of the stones and break them apart. The devices used for kidney stones are very large. Smaller versions of ESWT are used for cellulite on women’s legs, orthopedic injuries, and scar improvement. ESWT treatments have been successfully used for erectile dysfunction and Peyronie’s Disease without the deployment of adult stem cells/SVF. Most patients say the treatment is most similar to a deep massage.

What Results Can I Expect?

Although the early results using adult stem cells/SVF and ESWT are very promising, insufficient numbers of patients have been treated to give a definitive answer to this question. The Food and Drug Administration (FDA) has NOT approved the use of adult stem cells/SVF for any disorder including Peyronie’s Disease. Fortunately, we do have enough experience to talk about early trends in therapy. Numbers are small, but so far every patient treated has seen an improvement in erectile function and a reduction in penile curvature.

It is likely that many patients will desire a repeat round of ESWT and adult stem cell/SVF deployment about 6-12 months after the initial deployment. We do not yet know the percentage of patients that will undergo a second round. We define a satisfied patient as a patient that is happy they had the procedure and would do so again. Using those criteria, so far all the patients reported to the network have been satisfied.

The cost of the initial treatment ranges from $5,000 to $10,000. The range in cost is dependent on the complexity of delivering the cells back to you. For example, spine conditions require multiple physicians to deliver the cells back to your body and this requires an increase in cost as multiple doctors are involved in the procedure. For many people the initial treatment is all that is needed; however, for some conditions, subsequent treatments may be required and these are done at a reduced fee.

If You Have Peyronie’s Disease, Innovations Medical Can Help You

Innovations Medical provides Stem Cell Therapy procedures at both our Dallas and Fort Worth practice locations. We hope we have answered the majority of your questions. If you have other questions about Peyronie’s Disease or wish to schedule a consultation please call us at (214) 643-8665 or contact us online.